The Facebook platform is gaining more and more momentum as we are about to celebrate its first anniversary. It is almost becoming a de facto development platform and Facebook users increase day by day. Either we like it or not it is becoming a standard. We know that Facebook is much more than a destination site and Techcrunch believes it has the aspiration to be the next Operating System. Sure the new design resembles more and more to an OS but I think there is a deeper conceptual change of what we call PC.

Really who wants a computer without Internet? It is almost useless. Have you considered how much time do we spent on Facebook? How many web 2.0 apps are gaining more and more users? How much time we spend socializing on the PC? IM, email, social netowork, shared apps? Is still the Personal Computer still personal or are we moving to a social computer, shortly named SC? 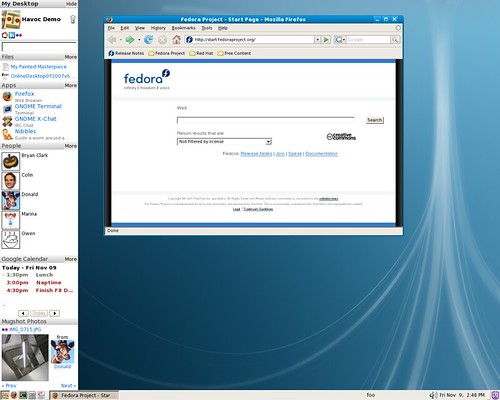 There have been many attemps to create a online desktop that connects to various online services. Besides the webtops there has been a serious attempt by Red Hat called Gnome Online Desktop. But is it is not an easy task to integrate all those services into traditional GUI. Sure web standards help in this direction and the desktop may lead to a mashup outside of the browser.

But the pie of online services seems to be largely divided by Google and Facebook. Facebook still misses the quality applications but there are some. There is Zoho Online Documents integrated as a FB app, there is the Last.FM module, now there is IM, a mailbox and so on. So would it make sense for Facebook to launch its own desktop, as usually we call it the FBuntu? I do not think it would be a success. Most of the people do not care to install a new operating system.

But a new operating system is not that hard to be used. Almost everything is ready for the desktop now and as there are so many cross operating system applications, name it Firefox, VLC, Skype, Google Earth the boundaries betweens OSes begin to blur. Asus did it with the EeePC version of Xandros. Users got used it. Everything was point and shoot. So what if all those options of the EeePC version of Xandros were instead Facebook links, Facebook applications all packed in a small blue Facebook branded box running a custom Ubuntu distro. A box packed with your friends, emails, hundreds of small applications and the ability to load instantly your photos to your Facebook profile? I stress the Facebook branded box term, as the brand loyalty of Facebook is sure greater than any other Linux or whatever alternative OS and I think customers would go out and buy it in dozens as they would with any new Apple product as long as it has the apple on it.

Could a bundle of cheap hardware and premium services be the answer to Facebook monetization? A social network making money out of hardware sales?